The Senior Sleuths: Dead In Bed By M. Glenda Rosen 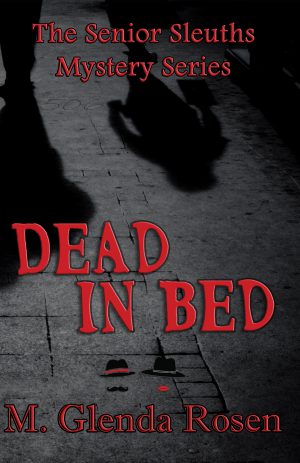 The Senior Sleuths: Dead In Bed

Like Nick and Nora Charles from “The Thin Man” series, Dick and Dora Zimmerman solve crimes, especially murders.” Along with Zero the Bookie (fashioned after the authors father) and a fascinating cast of other characters (such as Frankie Socks fresh out of the Witness Protection Program) the Zimmerman’s have the time-the money, the smarts and the chutzpah-to get involved in murder and mayhem, even when warned by the police to stay away…or else.

In these modern noir stories, the hard-boiled detectives are soft-boiled sleuths whose inner shell is softer and gentler, although their outer shell is still tough and determined. Of course, they can still be nearly beaten by the bad guys. But it is the puzzle of the mystery and putting the pieces together to solve it that matters.

“No doubt, thanks to my father, writing mysteries is in my DNA!  My father was a small time gangster. Really! So, it wouldn’t take a genius, a psychiatrist or a palm reader to figure out the geneses of my fascination with crime and criminals.  In my series, “The Senior Sleuths,” Zero the Bookie is a version of my dad and several other characters are based on his associates who I met, like Doc, The Gimp, Johnny the Jig, Fat Lawyer and others. What a wealth of material there was for me to claim! Believe me, I saw and heard a lot.”

Marcia Rosen has previously published four books in her mystery series, “Dying to Be Beautiful.”  Rosen is also author of “The Woman’s Business Therapist” and award-winning “My Memoir Workbook. For a dozen years she has given writing workshops on “Encouraging and Supporting the Writer Within You!” and “Now What? Marketing Your Book.”

She was founder and owner of a successful Marketing and Public Relations Agency for many years, created several radio and TV talk shows and received numerousawards for her work with business and professional women.  She currently resides in Carmel, California.  www.theseniorsleuths.

2 Comments on “The Senior Sleuths: Dead In Bed By M. Glenda Rosen”