The Religious Problem by Dennis Scheel

I’m not religious, but sure some are, so this is merely my view.

Religion has always been a serious issue, which for some people can go to the extremes.

For stories, they hold the same positives and negatives problems.

Religion in itself- no matter which religion it is, tends to always have good stories since back before we all wrote stuff down, it had to captivate by telling the stories. The great good prevails over the vicious evil- black and white, not in gray shades as most stories have. 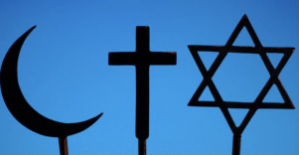 I’ve always been fascinated by them, if nothing else- they are good tales, no denying this.

Everyone knows those certain characters- God and the Devil, the ultimate good or bad. If one were to read about the devil, you’d expect he’d be up to no good, vice versa with God, you hope whatever he did would be good, because most people have been told this since childhood- you could say, they prepared them for you. Yet, I found a little illogical nature in God being all good- but making a flood, it never added up.

With this thought, I made my own story, a story where the Gods play a role, an alternate form of the characters. A fiction of course for those who are religious.

I always had the description when I tried; I took everything about religion- threw it into a pot and shook it to create my version. Lucky for me, it being fiction was enough to never get anyone being offended by it, but not everyone is so fortunate. Writing about religion can cause a powerful set of feelings for some people.

We must be so politically correct nowadays, which means certain things would suffer by doing so.

In my case, I only hinted at it in my first book, I kept focused on the introduction of the world, first went further into detail in book two. I personally felt it was a good way, as a normal evolution of the story. The main plot gets finished with my third, which might be the heaviest of the Gods and demons role, so here’s hoping it will go well!

As writers, we have to research a good deal when writing, the same applies when writing about religion, as it’s always best to know about what you’re writing- so you can determine, what you want to use, or not. Just because it is fiction, does not mean you can’t know about the subject at hand.

The more knowledgeable you are, the better the chance to make it enjoyable- and not to offend anyone…

Dennis Scheel has always had the stories running in his head, but not until after his accident, which left him mute and paralyzed on the right side was he able to tell them. After he worked his way back, he wanted to try to tell his story once more since an acquaintance told him there was talent in his poetry, he had been convinced by his ex not to write for ten years, she insisted he had no talent. This time tried in English since all other times failed. Finally, he succeeded, and he never stopped writing since. Which led to the completion of No Way Back- The Underworlds and the sequel Taken With a Dark Desire: The Underworlds

2 Comments on “The Religious Problem by Dennis Scheel ”