Millenials like Dystopias Because Authority Figures are Liars by Walter Rhein 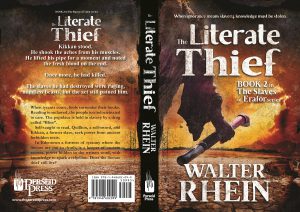 Millenials like Dystopias Because Authority Figures are Liars by Walter Rhein

I was recently on the phone with renowned fantasy author Janet Morris. Janet had just announced the release of my book ‘The Literate Thief,’ a dystopian fantasy novel with themes of fact suppression that has only become more relevant in the Trump regime. Janet had called to discuss the back cover matter, but we ended up having a more general discussion about the deteriorating state of the world.

As we talked, Janet expressed a certain sympathy for the next generation of young people. Millenials are unfairly bashed in the media, but the fact is, they haven’t had it easy. Over the last few decades, the only people getting richer are the people who were rich, to begin with, and now somebody figured out that the price of a college education should be to pay in advance everything you’re ever going to earn throughout your entire life.

In a nation that aspires to freedom, debt is the modern equivalent of slavery.

‘The Literate Thief,’ deals with a world much like ours, but with the deterioration accelerated to the point of almost satire. The problem with good and evil, when you encounter it in the real world, is that good guys don’t wear white hats, and bad guys aren’t snarling beasts that breathe green, noxious fumes. In fact, in reality, the representatives of evil are often more attractive than their good counterparts.

As I talked to Janet, she expressed that she hoped the young people would be able to see it. The way they voted indicates that they are aware of right vs. wrong, to a far greater degree than the generations that came before them. Still, there’s plenty of time to be corrupted, especially when frustration and a lack of income kick in. It’s easy to be eventually beaten down, particularly when you’re criticized enough, or told you’re a “disappointment” enough, whether that criticism is fair, or earned, or isn’t.

A book like ‘The Literate Thief,’ and the previous volume, ‘The Reader of Acheron,’ exists to reassure people with a nagging sensation in the back of their mind that, no, they aren’t crazy. Yes, the world is filled with liars. Yes, those people are telling you things that are not in your best interest. When you stop and take a step back, it’s actually amazing the audacity of the bold-faced lies that some people try to sell you. We’re all gaslighted to a certain extent, and the narratives of religion, family and patriotism can all be used, in the wrong hands, to bludgeon you into submission.

‘The Literate Thief‘ is not a book that you’re ever going to find in a mass-market bookstore, and that’s because the themes are not designed to help support a narrative that makes a small number of people rich. This is a book for individuals, and the purpose is to empower people to cut through the BS they’ve been programmed with and help them seize control of their lives.

I’ve got two daughters aged 5 and 7, and most of my writing is inspired by the fear of all these mind-control narratives and lies that permeate our society. We all have to develop the ability to carve up the narrative that’s presented to us and separate the meat from the fat. I sincerely hope ‘The Literate Thief‘ provides a tool to help people do that. I think it is, and for that reason, the only way to promote it is by word of mouth.

If young people are educated about how to defend themselves, then they won’t be susceptible to becoming the debt slaves of the powers that be. You can take it as truth that there are a lot of individuals and institutions in our society that will suppress that message whenever possible. So grab your copy here before it too is banned.

Thanks for reading, feel free to contact me via email (walterrhein@gmail.com), on Facebook or at my web page: StreetsOfLima.com.

← Freedom City By Philip Becnel
Dating, After the Apocalypse by Rod A. Walters →

Video Review – The Black Shade of White by Justice Cattleya