Get To Be Happy By Ted Larkins – Author Interview 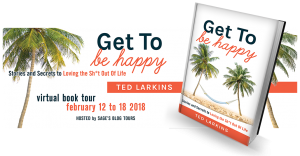 Get To Be Happy: Stories and Secrets to Loving the Sh*t Out Of Life

The secret to my happiness started during my high school days (yes, drugs were involved) and continued through hitchhiking across the country, through the suicide of my girlfriend, through bartending in many cities around the country and then a move to Japan. I lived there for nine years, helping start a $500 million business, including a LARKINS (my last name) line of product, finding enlightenment and meditating in Zen temples in the mountains of Hiroshima, meeting Mother Teresa in Calcutta, partying with Bon Jovi, experiencing the death of my business partner and then the loss of my daughter, and all the life lessons that come with the following statement: I Get To do this!

Ted Larkins is an author, speaker and accomplished business executive and entrepreneur. Through his book and keynote talks, he shares the powerful Get To Principle, the ability to say “I Get To” as opposed to “I have to”. Ted also co-developed a leading entertainment licensing company in Tokyo, representing major movie studios that included Paramount Pictures, Sony Pictures, and 20th Century Fox. He’s worked on projects with Jon Bon Jovi, Jack Nicklaus, Mariah Carey, and many other artists. He is former Senior Vice President of the North American division of CPLG, one of the world’s leading entertainment, sport and brand licensing agencies. He is on the board of directors of the Licensing Industry Merchandise Association (LIMA), co-chairing the charity committee and sitting on the executive committee. He is a guest lecturer for the UCLAx Entertainment Studies and Performing Arts program.

Over the last year and a half, during his daily 4 hour train commute to work in Hollywood, he wrote the book, “Get To Be Happy: Stories and Secrets On Loving the Sh*t Out of Life. Ted lives with his wife of 22 years and their two children in Southern California.

Tell us about your book. What made you write your story?

One day my young son asked me to play with him. I said, “Hang on buddy, I have to go pee.” As I neared the bathroom it occurred to me, “I don’t have to, I Get To.” As I came out I thought about work and said, “Oh, I gotta play with my son first.” And it occurred to me, “I don’t gotta, I Get To.”  That night after a fine meal at the house I said, “I have to do the dishes.” And as I started washing them, grumbling, I thought, “I don’t have to, I get to clean the dishes.”  What I realized in those moments of saying “I Get To” is that I felt compassion for others that don’t have what I have (running water in a bathroom, healthy children to play with, a good meal that dirty dishes were served on), and great appreciation for what I had in life. I also realized that the most successful times in my life were when I was embracing this “Get To” way of thinking. I also realized that deliberately saying, “I Get To” can bring peace, joy and happiness to my life most of the time. And sharing this Get To way of being can help others.  So, I decided to write my story and share how to use the Get To Principle. I offer “Happiness coaching” as well.

What do you find most challenging about the writing process, and how do you deal with it?

Making time to write is the key. I knew that if I dedicated 30 minutes a day, no matter what, even if I just scribbled (which I did some days) I eventually would have a book. It took about a year. I was inspired by Elizabeth Gilbert’s book, Big Magic, where she talks about her journey writing the hit book, Eat, Pray Love.

When and where do you do your writing?

I was commuting to work four hours a day on the train so was able to write then. But usually I wake up at 5 a.m. before the kids get up and write. I do that now. Again, it’s just a decision and then you do it. But here’s the thing, if you miss a day or whatever, don’t beat yourself up. Just recommit and do it again. Over and over.

What have you learned about promoting your books?

It’s a slow process, but it’s a blast. There are a lot of great tools and help for authors these days (like working with Sage) so you don’t have to do it alone. I send books to bloggers, radio stations. I sent one to Ellen and one to Oprah. Who knows if they’ll get it, or read it, but my intention is there. Intention is everything. I am building my Instagram and FaceBook following by posting about book signings and other events. I went to my local Barnes & Nobel and asked if I could do a book signing. They gave me some email address at corporate to write to. I sent seven emails, found a phone number and called 10 times. FINALLY, someone called me and agreed for me to have a book signing there.  Saturday, March 17 at 11 a.m., Huntington Beach, California if you’re going to be around.  J  The point is never give up. Don’t take any rejection, or most likely no answer at all, personally.

What are you most proud of as a writer?

I love my cover. In fact, I just received a “gold star” rating from TheBookDesigner.com.  It took months, four designers and 20+ designs to come to the simple design that I have.

If you could have dinner with any writer, living or dead, who would it be and what would you talk about?

I love Stephen King. Reading his books as a kid and the casual way he wrote, speaking directly to me, had a huge effect on my style. His more recent book On Writing, his autobiography, was a fantastic source of inspiration that lead me to write my book.