“Powerless to Resist”- Stroke – An Equal Opportunity Devastation in both Men and Women by Dr. James Okun 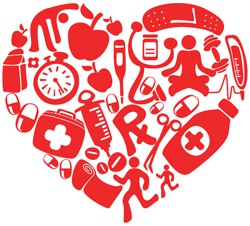 It is time for James Okun to pick our brain and inform us on some important medical matters. You can show your support by buying his books or leaving a comment here if you like- Jeyran Main

James D. Okun, MD is a Phi Beta Kappa graduate of Duke University and of the Albert Einstein College of Medicine in New York. He is the co-author of The History of New Innovations in Modern Medicine: New Thought and the Threat to Traditional Medicine

William Carlos Williams was a renowned poet who was also a medical doctor (Pediatrician). Probably his most famous poem was the wonderful “The Red Wheelbarrow” written in 1923. Apparently, Dr. Williams first suffered a heart attack and then a debilitating series of strokes (cerebrovascular accidents or CVA’s) over several years which eventually killed him. A “particularly serious stroke” in 1952 led him to comment, “That was the end. I was through with life.”

Another “partially paralyzing stroke in 1958 and a 1959 cancer operation” led to an inability to read and his health continued to deteriorate. By 1962 when he was interviewed by the Paris Review it had become very difficult for him to “choose words or pronounce them.” (www.poetry foundation.org). He died on March 4, 1963.

How Does Couples Therapy Work?

Per the American Stroke Association (www.strokeassociation.org)  “nearly 800,000 people in the United States have a stroke every year” with strokes killing “nearly 130,000 people” annually.

It turns out surprisingly that more women than men die from strokes each year (“6 in 10 people who die from strokes are women”) possibly since women tend to live longer. CDC statistics (Stroke Infographics – www.cdc.gov) indicate that “in the US 1 in 5 women will have a stroke” and “Each year stroke kills 2x as many women as breast cancer.”

The risk for women increases if they have hypertension, are taking birth control pills or are at midlife. The risk of a stroke for women also doubles in the ten years after menopause.

In addition to hypertension, the risk for a stroke for men and women generally also includes advanced age, race and ethnicity, obesity, a positive family history, smoking and diabetes, heart disease and a history of aneurysms or AVM’s in the brain (www.nhlbi.nih.gov).

From the psychosomatic point of view, a new study recently published in the renowned British medical journal The Lancet finds that increased stress as evidenced by increased activity in the portion of the brain known as the amygdala is linked to an increase in activity of the bone marrow and thus an increase in production of the marrow’s white blood cells.

Per Dr. Ahmed Tawakol, who led the study at Massachusetts General Hospital in Boston, “Our results provide a unique insight into how stress may lead to cardiovascular disease.” (www.thelancet.com/home).

Another study on the Psychosomatic Risk Factors of Stroke published in 2014 (journals.eco-vector.com) found that anxiety and depression were the two most important “mental health problems defining psychosomatic variant pathogenesis of cardiovascular and cerebrovascular complications.”

A further psychosomatic approach is seen per Eli Siegel in his “An Approach to a Philosophy of Self and Disease” chapter (In Self and World Definition Press, NY 1981) where he reminds us that “the original meaning of the word disease is lack of ease.” Therefore, a state of disharmony in the body due to constant stress would indeed be equivalent to a state of disease, including strokes.

He goes on to state on page 351 of Self and World, “Once a person is unconsciously disposed to scorn and hate and fear what is not himself, physiology can become versatile in disturbance.”

Millennials (aged 18 to 33) and Gen Xers (aged 34 to 47) reported the highest levels of stress and least relief in a survey reported by the American Psychological Association “Stress in America” on February 7, 2013 (www.apa.org/news/press). Boomers (aged 48-66) and Matures (aged 67 years and older) reported lower rates of stress increase over the year prior to the survey.

Strokes occur when either a blood vessel bursts in the brain causing bleeding (hemorrhagic) or when a blood clot (embolus) obstructs a major blood vessel supplying oxygen to a certain part of the brain (embolic – blood clot blocking the vessel leads to ischemia).

The blood supply brings essential oxygen to the brain to keep it alive. When that blood flow is obstructed or decreased for a long enough period (ischemia), that part of the brain will become damaged or die. Ischemic strokes account for approximately “87% of all stroke cases.”

When a clot blocks blood supply to the brain and the neurological deficits last only for a short period (usually less than 24 hours) this is known as a Transient Ischemic Attack or TIA (www.strokeassociation.org). This is important because it could be a harbinger of a full-blown stroke in the future. RIND types of strokes or “Reversible Ischemic Neurological Deficits” produce symptoms which usually reverse “within a few weeks” (www.caring.com).

The neurological deficits that occur will depend on the part of the brain affected. Symptoms of strokes include numbness, weakness, paralysis, slurred speech, problems with coordination, vision problems or difficulty swallowing.

As in Dr. Williams’ case, the ability to read and speak can be affected if blood flow is cut off or decreased to the parietal lobe (upper, back part of the brain behind the frontal lobe and above the occipital lobe) supplying the dominant side (hemisphere) of the brain. (medicine.jrank.org(www.verywell.com).

Treatments for strokes include the use of “clot-busting” drugs which must usually be given via IV “within 3 hours of having a stroke or within 4.5 hours in certain eligible patients.” (www.strokeassociation.org).  These drugs help to dissolve the offending clot and reestablish circulation of blood and oxygen to the brain before permanent damage occurs.

Other treatments for ischemic strokes involve the threading of a catheter up to the blocked artery in the brain and removing the clot “within 6 hours of an acute stroke.”

A stroke is a devastating condition whose risk can be lessened by controlling medical conditions such as hypertension, diabetes, increased cholesterol and heart disease and reducing risks like obesity, smoking and high levels of stress (understanding what in one’s life is causing these behaviors is crucial to a healthier lifestyle). Early recognition of the symptoms of a stroke can lead to earlier intervention and a greater potential to save neurological function.

James D. Okun, MD is a Phi Beta Kapa graduate of Duke University and of the Albert Einstein College of Medicine in New York. He is the co-author of The History of New Innovations in Modern Medicine: New Thought and the Threat to Traditional Medicine

4 Comments on ““Powerless to Resist”- Stroke – An Equal Opportunity Devastation in both Men and Women by Dr. James Okun”